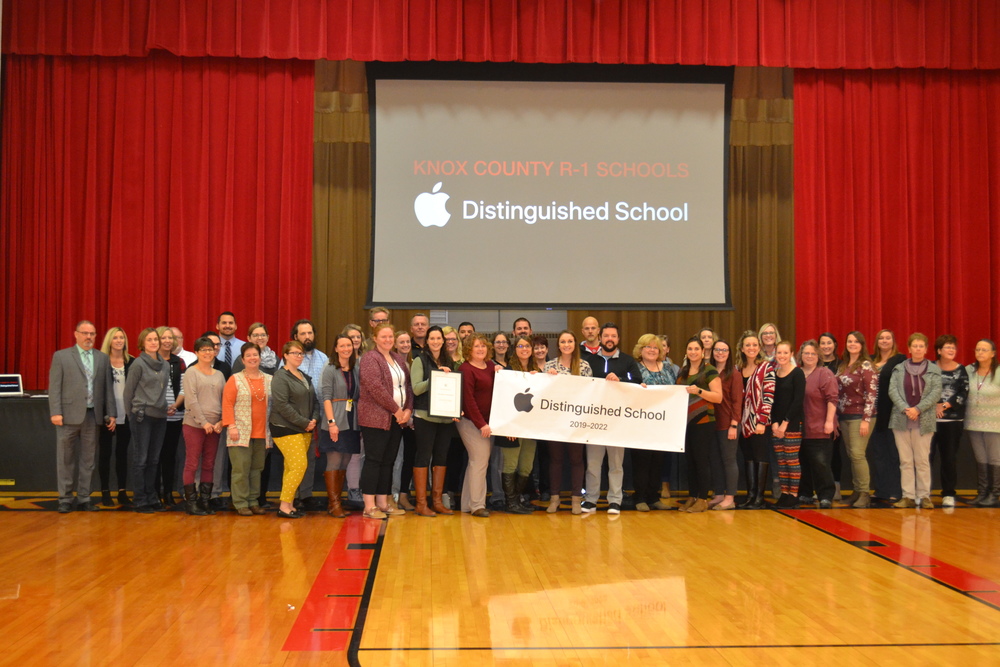 On Wednesday, November 13, Knox County R-I held an assembly to announce they were named an Apple Distinguished School for the next three years. Brent Catlett, the development executive for Missouri for Apple, and Rhonda Goedeker, the account executive for the education division from Apple, were both present. Catlett talked to students about how renewing the Apple Distinguished School designation was impressive.  Catlett said, “If I am being totally transparent and honest with you, not many schools could make the designation.” The school was presented a plaque from Apple as well as a banner to display. Superintendent Andy Turgeon asked all teachers for a group photo with the banner as a way to recognize them for their hard work and dedication to evolving their classrooms to incorporate the use of technology.

After the assembly, Turgeon was asked how the use of technology has changed the way students learn, to which he responded, “The technology we have added has given students more opportunities to control their own learning destiny.” He also said that according to Apple, Apple Distinguished Schools are centers of innovation, leadership, and educational excellence that use Apple products to inspire creativity, collaboration, and critical thinking. Apple Distinguished Schools showcase innovative uses of technology, learning, teaching, and the school environment and document the results of academic accomplishment. According to Turgeon, Knox became an Apple Distinguished school by putting a book together showing how students are being innovative and creative with the use of technology. The school environment also has to reflect the use of Apple tools. When asked what being Apple Distinguished means to him, Turgeon replied, “I think that is is nice for the teachers to be showcased for their hard work and to showcase what our students are capable of doing. It expresses that we do have one of the best schools in the state of Missouri.”

Innovative Learning Specialist Becky Barnhill was also asked about the certification of being an Apple Distinguished School. Barnhill said that being Apple Distinguished means Knox County R-1is a one-to-one school utilizing technology to immerse its students into the world of innovation and technology. In order for Knox County to reapply for the certification Barnhill explained, “We had to design a new book, and fill out an application, and have at least 75 percent of our teachers be Apple teacher certified.”

The process it takes to become Apple Distinguished can be a lengthy one. First, the school has to gather data, student examples and teacher lessons using technology to create a book and then they have to submit it to iBooks. There is a three year renewal process to be considered for recertification. The school may be approved and if so, they receive their plaque and certification. Once the school has received the certification, they start the process over again. Barnhill said that being an Apple Distinguished School has its advantages, which include more professional development resources for the staff. These resources allow students to receive more versatility in the classroom. She also said that the school offers more of a variety of career readiness for students with the resources they gained from being an Apple Distinguished School. Barnhill stated, “To me, it means that we are on the right track for setting our students up to be successful in many different career paths, including jobs that have yet to be created.”