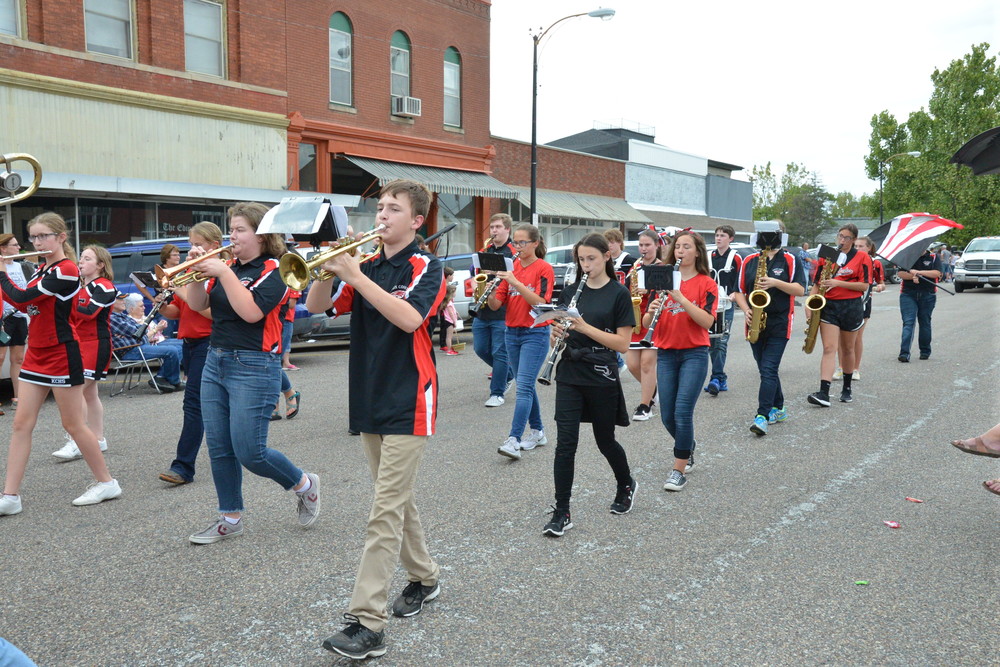 Knox County Band has a new director and teacher this year, Ms. Lisa Blake. Blake, an Knox County alumnae said that things are going good but the students are in a building year, and are making great progress over the short time that she has had them this year. She said that she was excited to see the progress students continue to make throughout the rest of the year. Along with first hour high school band, the school is offering zero hour band, which is where students come to school before school starts and practice their routine for the week. Blake said that the push to get zero hour band on the schedule came from her personal experience with being in band class in high school. She said that the only way she could stay in band in high school was with zero hour band. Now, over one-third of the high school band is in zero hour, along with three-fourths of the choir students. Band travels to many different events throughout the year, and some of the ones they have been to so far include the Corn Fest parade and Hannibal Band Day. Blake said that Corn Fest went well, and at Hannibal Band Day the band received good comments from the judges although they did not perform at the field show. The band also travelled to Culver-Stockton College to be a part of their homecoming parade on October 19 and placed 5th. The band is also busy preparing for pep band as well as their Christmas performance.

Blakes’ goals for band include getting the band to contest this spring, and to get the students' main foundations and techniques of playing rebuilt. She would like to get them to a higher level of playing so they can play more difficult music by next year. Lastly, she also said that she would like to increase their number from 31 members to 50.

Drum Majorette, Arysta Snyder said that band is going good this year, and that students are slowly but surely gaining the skills they need in order to play. Snyder said the events they have played so far this year have gone well. She also said that band this year is taking a more serious approach by playing every single day to ensure that students are learning and gaining the knowledge they need to improve their playing abilities. Snyder said that she has already achieved her goal for band this year by being named drum majorette. She is technically not in zero hour band, but Snyder stills shows up on Tuesdays and Thursdays, because she feels as though it is her responsibility as drum majorette to be there and lead the band. She also said she is happy with the number of people they have in band, but they could always use more.

Jazzlynn Holman is a senior band member, and she said that she feels more driven and motivated in band this year. Her role in band is playing the flute, but she also feels as though she is a role model for younger students since she is a senior. Holman says that the band has received high praise so far, although they do have some things to improve on. She said in order to improve their skills they play every day and they do exercises and scales. Holman also said that they are working to improve their technique this year in order to play more difficult music. Her personal goal this year is to memorize all her fingerings for flute and to achieve first chair flute. Holman is also a part of zero hour band and says that she goes because she wants to make the band better and without any one of the members, it makes playing harder.