Knox County High School Student Council hosted Homecoming from September 27th - October 1st. The theme this year was “Home Sweet Homecoming.” During the week of homecoming, students have the opportunity to participate in dress-up days and win a pizza party. Monday was "Rolo" Out of Bed, as students showed up to school wearing their pj's. Tuesday was "Nerds or Lifesavers" which included students dressings up like a nerd or superhero. Every grade then wore a different color on Wednesday which was "Skittles Day." Thursday was twin day, for "Left or Right Twix"  and Friday was "Life is Sweet" at KCHS spirit day. Several competitions were held throughout the week. The senior class won spirit week with the most kids dressed up each day.  Spirit king and queen were also crowned; Dylan Powers as king and Angel Carr as queen. The freshmen were awarded the best float in the parade.

The preparation for homecoming week is a very busy time says student council sponsor, Mrs. Dawn Llewellyn. Student Council begins planning at least a month in advance, first deciding on a theme, then dress-up days, and organizing the parade and activity night. Often students and teachers stay after school to prepare for all the events. Class sponsors and classes plan a float design for their shopping cart and have to make their creations come to life.  The cheerleaders and their coach plan the pep rally for Friday afternoon as well.

Court attendants and king and senior candidates are voted on by their classes.

This year the freshmen court attendants were Shalee Zuccarini and Nolan Shinkle. Shalee is the daughter of Eric Strange and Jennifer Ragar of Knox City. She is involved in softball and FBLA. Nolan is the son of Nathan Shinkle and Deborah Shinkle of Edina. He is involved in football, basketball, Spanish Club, and Campus Bowl.

The first group of Senior candidates was Angel Carr and Braydon Miller. Angel is the daughter of Chris and Katie Carr of Edina and the late Shashana Carr. She is involved in cheerleading, flags, FBLA, dance, and FCCLA. Braydon is the son of Russ and Erin Miller of Knox City. He is involved in football, basketball, baseball, FFA, and Trapshooting.

Hannah Dye and Elijah Ward were the next set of senior candidates. Hannah is the daughter of Tom and Tammy Dye of Knox City. She is involved in flags, Art Club, FBLA, and National Honor Society. Elijah is the son of Robert and Miranda Ward of Edina. He is involved in football, FFA, baseball, and Trapshooting.

Lastly, Cheyenne Snyder and Carter Marble. Cheyenne is the daughter of Jason and Amanda Snyder of Rutledge. She is involved in FFA, FBLA, flags, National Honor Society, and Spanish Club. Carter is the son of Tony and Kyane Marble of Edina. He is involved in Trapshooting, football, baseball, basketball, Spanish Club, and FFA.

During the halftime show, Elijah Ward and Taylor Walker were crowned as the Homecoming King and Queen. 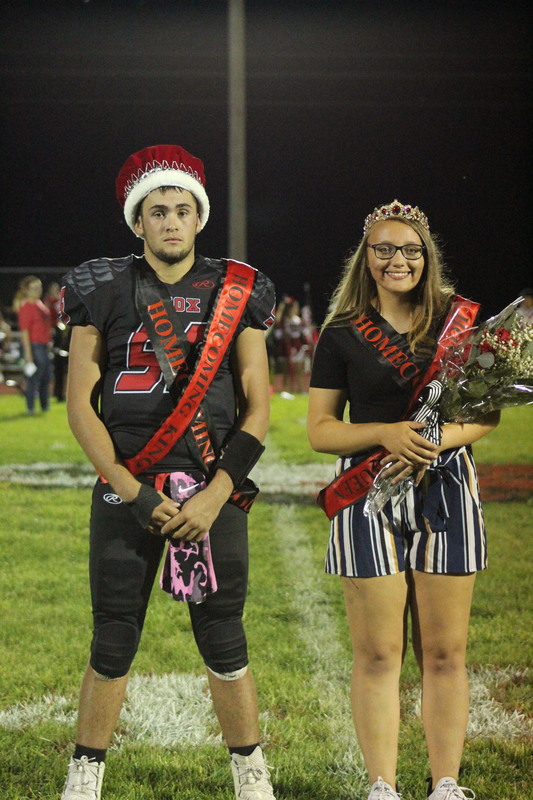